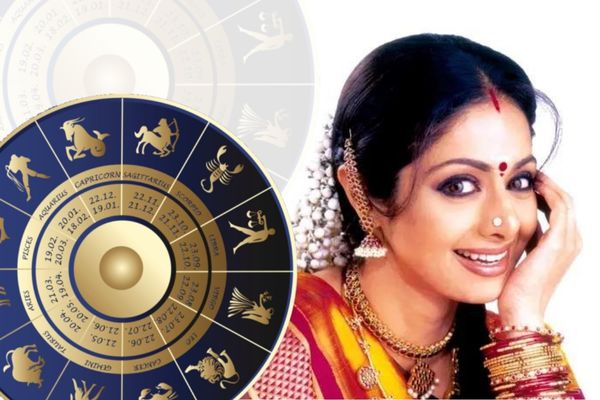 So the charming, mesmerizing Roop ki Rani, unfortunately, left too early for her heavenly abode. It’s really tragic for all of us. The beautiful, charismatic, desirable damsel finally rests in Peace. How I wish if it was possible to save her. Anyway, in the subsequent paras, I tried to do a brief analysis of her. For me, this analysis is one of the very important lessons in learning Vedic Astrology. May Lord Ganesha bless us.

Actress Sri Devi was born in Karka Lagna (Cancer Ascendant) with Lagna lord Moon exalted in Taurus in 11th house. Venus and Sun conjoin in her Lagna. There is an exchange of lagna lord moon with 11th lord Venus resulting into a great yoga (Parivartan Yoga) which will make her famous, rich and revered person in the field of fine arts, Dance, Cinema, affluence etc.  The exchange yoga and presence of Venus in Lagna, and exalted moon makes her a true feminine beauty as both female planets are in a mutual exchange yoga.  This yoga also makes Sri Devi a highly emotional, sensitive, learned, caring, motherly and excellent social being. She is very high on water element (Emotions) and this grants her a very high ability to think about welfare of others, without jealousy, no animosity or inimical behavior with others and an egalitarian good behavior towards others. The Moon and Venus placement also gives her a sophisticated approach to life, clean and fine dealings and no-nonsense approach.  However, placement of marrkesh Sun close to venus makes Venus combust (asta) thereby depleting the power of Venus and bringing in a kind of negative aspect to the Venutian qualities related to Lagna. This could make her emotionally imbalanced and insecure, poor decision making in terms of matters related to properties and gain from properties, financial dealings, overall gains from profession, an inferiority complex related to own beauty and self. Venus being matri karka as char karka also shows the influence and importance of her mother in Sri Devi’s life. Her mother would be making most decisions in terms of finances, fees, publicity, investments etc. But combust Venus is not likely to give favourable results and more often than not the mother will make faulty decisions and advice resulting into overall financial losses.

Retrograde Saturn (shani) is in own house Capricorn in her 7th house directly aspecting Lagna, sun and Venus. The strong Shani as lord of seventh house will give him a spouse who would stand by her and be faithful. Similarly are her associations, partnerships and associates who will be few but faithful and trustworthy. It also gives her marriage to an elderly person or much older than her and comparatively less handsome or Elegant. It also causes delayed marriage. However, Sun as significator of father suffers on account of Saturn’s direct aspect on Sun. This may result in her father suffering from some heart related disease, early demise and lesser support and blessings from him. As lord of resources, savings and finances, Sun in form of father is likely to cause setback to her savings and earnings if her father makes those decisions on her behalf. Sun will also cause headaches and fevers but moon will ensure quick recovery too. Shani is also the lord of her ayush(age) and being retrograde is loaded with past karmic load and will play a significant role in her longevity or Age factor. She must be disciplined and avoid alcohol (part of Shad ripus) as it could lead to heavy risks on her life.

She is also having Retrograde Jupiter in own rasi Pisces in 9th house and it is also aspecting lagna. This shows a strong sense of duty, charity, respect to elderly, gurus and father. She will bring lot of happiness to her father. At the same time it blesses her with minimum two children. The aspect on Lagna dictates simple living, reading and practicing Vedas or avoiding tamas whether Non-Veg or such like indulgences to pay off past life Karmic load. Failure to abide by Jupiter could lead to heavy penalty. Mercury as lord of 3rd and 12th houses but placed in a fire sign(Leo) is not favourably disposed. This entails expenses on account of help to siblings. Her siblings will either cause loss to her wealth or take away a part of it, either way she has to support or give them money. This house also relates to issues of communication, analysis, faulty planning and analysis plus bad financial investments as it is placed in her 2nd house.

Mangla as lord of 5th house and 10th house is her Yog Karka(Great beneficiary) planet. Being in 3rd house of siblings is well placed and grants her good siblings. She will love them and look after them. It will also bring in competition and challenges but she will be able to easily accomplish and succeed. This also makes her large hearted and meritorious, a fighter and ‘never say die’ attitude and will always give her enemies a tough fight.

Her career started at age 4 as a child actor. This was in Moon-Mangla period, as Moon is exalted in 11th house so good gains in Moon Dasha had to flow in. Moon also gives results of Venus due to exchange Yoga and thus gets her into film Industry. Mangla is the lord of 5th and rules entertainment and as lord of 10th rules career or profession.  She became an instant hit. Her run in movies till 1982(Moon followed by Mangla Dasa) will make her very popular and an established Superstar bringing in lots of wealth and popularity. This phenomenon will continue unabated till 1987 and during this period income from abroad will flow in as her movies will be hit in Middle East countries (Rahu effect in 12th house). She would also make lot of connections from abroad.

Thereafter a period of downfall starts in her career bringing in Frustration. Bad investments, losses and non-recovery of loans or own money, problems from Siblings, Default by lenders will start hurting her life and career. Beginning June 2000 she is likely to suffer from digestive and Liver related issues. It is also expected that post 1987 she would have tendencies to consume lot of alcohol. The factors leading would be consumption of Tamsic diet and alcohol. From 2000 till 2016 she would be supporting her family and husband who is likely to be under debts (6th house and Jupiter effect). This is the karmic load of her past life too (Retrograde Jupiter). She would receive support from her friends and well-wishers during this period to overcome debts. She may go for off and on films or entertainment during this time but success rate will be low.

Her marriage would be controversial (Rahu in 7th in D-9 and combust Venus). The Yogas of marriage is between1985-1987 (Rahu-Jupiter). Her second marriage would be between 1996 to1997 but it would be unexpected (Rahu-Venus). She married twice, once with Mithun and then with Boney Kapoor. Most readers would know about her marital issues and difficulties.

Sri Devi will undergo her acid test of ayush (age) starting Jun 2016. Her Primary and secondary marrkesh are Saturn and Sun. Both are aspecting each other with Saturn being the stronger marrkesh. This Yoga is seen in her D-9 Kundli also and both are in Exchange (Parivartana Yoga). The situation of Saturn and Sun in D-30 kundli is of extreme importance as both Sun and Saturn are conjoined together in Karmic Rasi ‘Scorpio’ ruled by Ketu, the lord of poisons. This is an important observation. We have Jupiter, the lord of 6th i.e Disease in D-1 kundli and lord of Lagna in D-30 kundli. Ketu is with Rahu in 8th house of D-30 which represents threat to Life or Ayush.

Therefore, a combination of Saturn-Sun with Jupiter and Ketu could prove to be very bad for her. Planets in Scorpio represents past life Karma. So we have the lords of 2nd,6th,7th,8thand 9th of D-1 kundli in Scorpio rasi of D-30 Kundli. The factors involved in her death must be connected with Alcohol (Shani), Digestion or problems of Liver or bile or diseased liver (Jupiter), and Heart (Sun) and POISON or Poisonous chemicals (Ketu).

It is interesting to note that on 24 Feb, the day was Saturday, the time was late evening. The Dasa period running for Sridevi was Saturn(Mahadasha)-Saturn(AntraDasha)-Sun(Pratyantar Dasha)-Ketu (sukshma Dasha)-Rahu(PranaDasha). The death would occur in a bathroom (Rahu) caused due to Poison(Ketu) in an intoxicated form(Shani) which will cause a Cardiac arrest or stop functioning of Heart (Sun).

Ketu is also the lord of mystery. So Sri Devi’s death will be associated with mysterious circumstances. It will be only after 26 Feb things will clear out. Since Rahu is the partial lord of 8th house in D-1 and is placed in 12th house. Rahu represents foreign land or abroad, her death will happen abroad.

Could Sri Devi have lived longer?

Indeed Sri Devi was going through a tough time of life but  as an astrologer I would have given her definite advice and remedial measures. I feel that adhering to them could have possibly helped her improve the probability of living longer. While Life and Death are in hands of almighty but I personally feel that she did not reach her Purnayyu (full life). There are reasons to that. When you don’t abide by the cosmic directions communicated by cosmic forces, penalty is inevitable.

Sri Devi was born in a Brahmin family of Ayyapans and she was raised as a Veg. Her extremely strong Jupiter in 9th house (dharma, fortune and blessings) doesn’t allow her indulgence especially in any of tamsic substances. You can not afford to not listen to Jupitar (Guru). Jupiter or right knowledge alone can save someone. We can relate this factor in Late J.Jaya Lalitha’s Kundli also. The learned would try to delve more.

Lastly, I feel that Sri Devi’s case makes for an important astrological study and analysis. For students of Astrology this case could help them understand a lot, being a very recent case. As an evolving student of Vedic astrology, I would appreciate your comments and suggestions on above.